Filmmakers, IT experts and architects met on Saturday in London, New Cross at the Deptford TV Remix Conference.

The conference in Goldsmiths College marked the launch of the ambitious video project Deptford TV. The local online video database, initiated by Adnan Hadzi (Goldsmiths College), aims to document the regeneration of the area Deptford/New Cross, accessible on the internet and under a Creative Commons Licence. This means, the internet user can download local videos and use them for noncommercial purpose (more license details on the deptford.tv website).

The database for the local Deptford TV clips itself has been set up in the last weeks and months by Bitnik (picture above) from Zurich/Switzerland. Bitnik is an internationally experienced media collective with a proven record in regeneration and arts projects. Deptford TV uses only Open Source software. This is uncommercial software, which is developed by volunteers. This software can be downloaded from the web without charge, like eg Linux software. 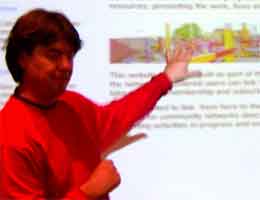 In the last weeks, the database has been consistently filled up with content from local volunteers. All material is stored in h-264 format, an open source format, equivalent to the commercial IPod format. All material added to the database is stored with an Edit Decision List. This way all material can be re-assembled and re-edited at a later point easily.

The project will be ongoing for some 3 years at least and is still at an early stage. Though now basically functioning, more technical features and content will be added. Technical hickups at this stage should not surprise. Deptford TV has now uploaded first edited videos.

On Friday Deptford TV had invited to a local 5 hour walk to locations with public screens, like the Laban Centre, where the results of the ongoing video project were shown (distributed through the wireless network of Boundless Coop).

At the conference evening a video remix screening with industrial sound performance on the Boat in Deptford Creek marked the end of this local media weekend in New Cross and Deptford. 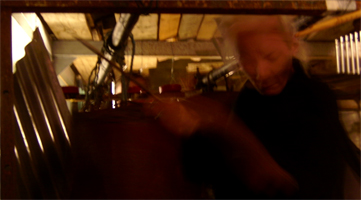 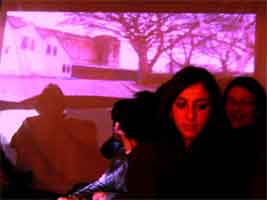