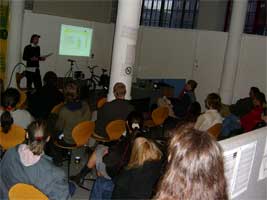 Speakers of 13 organisations have presented their organisations in Deptford on a conference for the progress of the social economy.
The conference in the Old Destillery ended with drinks and food after the launch of the ecological charity OLAN. The trust,
set up by Storm Poorun, is based in South East London New Cross/Deptford and aims to work nationwide to support wildlife and social/environmental
projects with legal and administrative advice.

Smiling after the launch of OLAN: Storm Poorun

Present at the conference was a wide range of speakers from co-ops and other organisations. Theme of the conference:
"Progressing the social economy through Arts, Media and Design - and vice versa".
The conference (homepage:althousing.net) was organised by James Mac Donald, former chair of Sanford Housing Co-op, who
could convince the Committee of Management in Sanford Walk to finance the 9 hour conference out of co-op budget, (based on the 5th, 6th and 7th International Co-operative Principles, if one likes). In the previous
years, the former chair of Sanford had organised two alternative housing conferences. As speaker he presented his housing co-op on
Saturday.Sanford currently aims to cut its carbon emmission by 60 % and has embarked a process which would lead to a partly
switch of electricity to wind energy, produced by wind generators, erected on the co-op's land. The "Carbon 60" project could mean
as well a biomass generator and more environmental restructuration to meet the 60% target.

South East London Economy Development Agency SELEDA was represented in Deptford by Maria Drury.
SELEDA has helped to set up the local Credit Union (finacial co-op), a food co-op, community allotments and more projects.
SELEDA is based in 165 New Cross Road. No website at time of conference.

In the age of computers no wonder co-ops melt with the internet. The Open Coop, presented by
Josef Davies-Coates, is an online co-op which creates an online social economy with sheer endless possibilities.
meeting, trading, chatting, exchanging, peer-to-peer communication, you name it...
The Open Coop only uses open source software, which is freely and at no cost available. Nice website.

With LETS Lisa introduced a local exchange trading system to the conference.
LETS is an exchange scheme of services and skills without any money changing hands.
Like: Where you offer your help in gardening or computing, you might get back help with
your washing machine problem or language lessons.

Other speakers and organisations included: 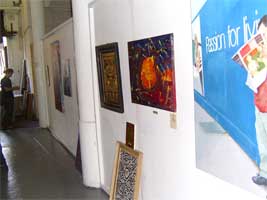 What else? The food was excellent and vegan. A pity that workshops had to be cancelled due
to time problems. We spotted John Clarke and can promise you some poetry coming soon. After the launch of OLAN, DJ Ian played tunes on one deck.

Spinning the deck after the conference: DJ Ian